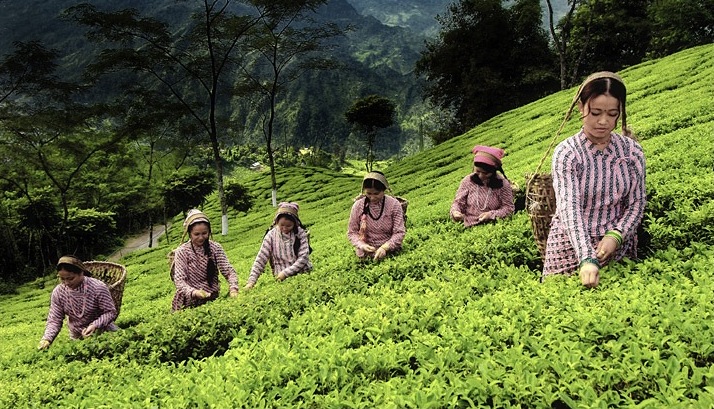 The opportunity to visit the bustling bazaars, the Buddhist stupa at Boudhanath, and the Hindu Pashupatinath Temple along with the exciting option to take a scenic flight towards Everest. Flying to Bhadrapur on the Nepali-Indian border and driving down the foothills and tea gardens to the historic and enchanting former British hill station of Darjeeling also known as the queen of the hills is spectacular. Taking a short ride on the famous Toy Train and witnessing the majestic sunrise on the peaks of Everest and Kanchenjunga.

Visiting Sikkim and its capital, Gangtok, where you can explore the famous Rumtek Monastery, the largest in the country, before driving to Kalimpong, previously an important centre for wool trade with Tibet is fascinating.

Exploring the Kingdom of Bhutan from Phuntsholing at the border to the capital, Thimphu, where you will wander the Dzongs of this ancient kingdom. Visiting Taktsang (Tigers Nest) a small monastery clinging precariously to a cliff edge in Paro, is a rare opportunity. This structure has become a symbol of a beautiful and mysterious kingdom that very few have experienced.

Upon arrival in Kathmandu, our Himalayan Hikers representative at the airport will meet you and have you transferred to your hotel. The drive from the airport to the hotel is around 20 minutes.A briefing given by the group leader is scheduled for the late afternoon. He will discuss your tour program and co-ordinate any last minute arrangements.The evening is free, but the tour leader will usually organize an evening meal  at one of Kathmandu’s fine Nepali restaurants.

In the morning you will explore Kathmandu on an organised sightseeing tour.You will visit Bodhnath Stupa, one of the biggest Buddhist shrines in the world, where you will observe Buddhist monks in prayer in the monasteries surrounding the Stupa.You will also visit Pashupatinath, the most famous Hindu temple in the country, located on the banks of the holy Bagmati River. Here you will see Hindu holy men (sadhus) meditating, pilgrims bathing, and occasionally funeral pyres burning on the ghats.The rest of your afternoon in Kathmandu is free for further sightseeing and exploration. In the late afternoon your leader will confirm departure information for the next morning.Tonight you will partake in a wonderful traditional Nepalese banquet with traditional dancing.

The next part of your journey is a short flight to Bhadrapur, in the south-east of Nepal. From here it is a short journey to the Indian border at Kakarvitta, where you will need to complete immigration formalities.Your journey continues with a drive through the Indian plains for an hour before the road starts to climb through the jungles, tea gardens, small towns, and village settlements that line the route to Darjeeling. On the way you may see the famous Darjeeling Toy Train, winding its way up the hill.Darjeeling was once the summer capital of Bengal during the British Raj and is one of the most beautiful of India’s hill stations. Commonly called the Queen of the Hills, her crown is the mighty peak of Kanchenjunga, the world’s third highest peak, which overlooks the town in a most spectacular manner.

Today brings with it a full day of sightseeing including an exploration of the Botanical Gardens, famous for its unique collection of Himalayan plants, flowers, and orchids.You will also visit the Tibetan Refugee Centre, established in 1959 for Tibetans fleeing the Chinese invasion. The handicraft centre here has a selection of hand-woven carpets and other items for sale.The Himalayan Mountaineering Institute is well worth a visit, as it has an interesting museum dedicated to Himalayan climbing fraternity.Next, you will have the opportunity to discover Tibetan monasteries, there is also free time to stroll around the town and mingle with the locals.

You will rise early today for an excursion to Tiger Hill for sunrise. From here there are magnificent views of Kanchenjunga and Everest, as well as hundreds of other Himalayan giants.On the way back to the hotel you will also view Ghoom Monastery (built in 1875) and stop at Batasia Loop where you will take a short ride on the early morning Toy Train.After breakfast, you will head off for the drive to Gangtok, the capital of Sikkim. Upon arrival, you will have the remainder of the day to spend at your leisure.The following morning you will visit Rumtek Monastery, the largest in Sikkim with an original building that dates back to 1717.In the afternoon, enjoy further sightseeing in Gangtok where you’ll visit the Drodul Chorten, which was built to commemorate the victory of good over evil. Surrounding the chorten are 108 prayer wheels. The Research Institute of Tibetology is renowned worldwide for studies in the Buddhist philosophy and religion. A number of priceless religious paintings (thangkas), statues, and other religious artworks are housed here. You will also visit Enchay Monastery and the orchid sanctuary, which contains over 200 exotic species.

After breakfast you will take a scenic drive to Kalimpong, once a famous centre of the eastern and central Tibetan wool trade. The town is situated below the saddle connecting the Deolo and Rinkingpong (Durbin) Hills.Kalimpong has a temperate climate throughout the year and experiences only a light monsoon, which is ideal for the many flower nurseries in the town. Kalimpong was once the headquarters of the Bhutanese Governor, the word kalim means minister, and pong means stronghold.

You will start your day by visiting the nearby Zangdopheir Monastery, which is shadowed by the impressive peak of Kanchenjunga.Descending into the plains en route to the Bhutan border at Phuntsholing, you will pass through immigration and check in to the hotel for the night. (Driving time: approximately five hours).

The drive from Phuntsholing to Thimphu takes about five hours, with a number of stops along the way to take in various picturesque areas.After settling in at the hotel, you can venture to the local market or take a leisurely stroll around town to immerse yourself in the immense beauty of this very special place. (Driving time: approximately five hours).

After breakfast you will have the opportunity to view Tashicho Dzong (Fortress of the Glorious Religion), the administrative and religious centre of Bhutan, located on the right bank of Thimphu Chu. The original building dates back to 1216, the present Dzong on the other hand, was built by Shabdrung Nawang Namgyal in 1641.You will then drive to the Memorial Chorten, built in 1974 in memory of King Jigmi Dorjee Wangchuk. Other sights in the capital include the Painting School, an institution where children receive formal education in the art of traditional painting, sculpture and woodcarving. You may also visit Drubthob Gompa Nunnery, which houses about 40 nuns and also provides shelter for aging women and orphaned girls. Thimphu has an excellent range of handicrafts, most notably woven cloth, wooden masks, thangkas, silverware, jewellery, and bamboo craft that come from all over Bhutan.

You will awake and embark upon an early morning drive from Thimphu for an excursion to the legendary Taktsang (Tiger’s Nest) – a small monastery clinging to a rock cliff 900 metres above the valley floor. A few years ago the monastery was seriously damaged by fire but has since been rebuilt, unfortunately tourists are no longer permitted to enter the interior of the monastery. Legend has it that the great guru, Padmasambhawa, flew here from Tibet on the back of a tigress to subdue the demons of Paro Valley.During your stay in Paro you will also visit Drukgyal Dzong, a famous 17th century fortress that repelled many Tibetan invasions.Time permitting, you may also visit Ta Dzong, a circular fortress built in the mid 17th century and now converted into the National Museum. It houses an excellent collection of Bhutanese antiquities. (Driving time: approximately two hours).

After breakfast you will be transferred to the airport for your flight out, bringing to an end to this exciting journey exploring the highlights of the Himalaya Region. (Please note that your departure flight is not included as part of the trip and must be booked separately).

What is not Included